Read all about the many Roman historical sites you can visit in a luxury car rental Rome. Learn all about the city’s rich history and marvel at the architecture.

Ancient Romans were pioneers of architecture as they were constantly innovating. They introduced the rest of the world to the concept of baked brick, the arch, and utilizing cement and concrete. Roman buildings are perhaps the strongest buildings ever created as many of them still stand tall in Rome and have been preserved well by the locals and the government.

So, when in Rome, do as the Romans do. There is no better way to explore the Italian capital than with luxury car rental Rome. Rome is home to over 50 ancient monuments and 40 ruins. All bear historical significance and are a must-see for locals and tourists alike. However, covering all the sites in one trip is an impossible feat. After all, you want to savour the city and not just fly through it.

If you’re wondering which historical sites you should visit, we’ve got you covered. Here is our quick yet detailed Roman guide of places you must visit in your rented luxury car.

The Colosseum is one historical site on every traveler’s bucket list and on every website’s guide. But does it live up to the hype? The answer is yes. It is one of the most popular attractions in Italy. It was used as an amphitheatre when it was first built in 80 AD. With 80 entrances and a seating capacity of 50,000, this is where gladiators came to fight, and spectators cheered them on. When you visit, you can still feel the palpable adrenaline rush in the air.

Regardless of how old it is, it is still the largest amphitheatre in the world. It is easily accessible as it is located in the middle of the city. Check it off your bucket list by driving down in a luxury car hire and taking a guided tour or exploring it on your own.

Constructed in 126 AD, the Pantheon is Rome’s best-preserved buildings. In ancient times, it served as a place of worship, in reverence of the Roman gods. In the 7th century, it was converted into a catholic church. The defining feature of the Pantheon is its concrete dome and its central opening. This dome is the largest unreinforced concrete dome in the world. 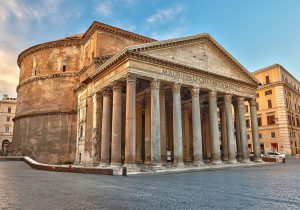 Visitors flock to the Pantheon to admire the architecture that still looks brand new. You should absolutely visit the Pantheon on a rainy day as you can see and hear the rain entering the building through the hole in the dome. It truly is a magical experience, plus it is only a 10-minute drive from the Colosseum so you can easily drive to both places by renting a luxury car.

The Baths of Caracalla

This location could house 1,600 bathers together. But that’s not all. The site also has a public library and a wrestling school, acting as a leisure centre for those in need of relaxation. The Baths of Caracalla were in use until the 6th century, but the site’s hydraulic installations were destroyed during the Gothic War. The site is now used for some of Rome’s greatest opera and ballet performances.

The summer is the perfect time to visit if you want to catch an opera or ballet show. Located south of the Colosseum, you can travel to the Baths in your luxury car rental Rome and spend an entire day admiring the architecture.

Given Rome’s history involving gladiators and animals, why not try living like the ancient Romans? The Gladiator School located 2.5 kilometres from the Colosseum offers two-hour long lessons. The lessons are conducted by the Historic Group of Rome. They provide you with the clothes gladiators used to wear, the weapons they used, and food and drinks they feasted on before a fight.

It is a unique experience and one that you will fondly recall years down the line. There is adequate parking space so don’t be shy about bringing your rented luxury car.

If you’re visiting Rome, you can’t leave without visiting St. Peter’s Basilica. The single most important site in Christianity, the Basilica is located in Vatican City, west of Rome. It is home to the Pope. Even if you are not fond of religious sites, you can’t miss out on St. Peter’s. Anyone who has ever visited will describe the building as breathtaking.

You do not need to pay any fees to enter most parts but climbing the dome and seeing the treasury carries a small admission charge. It took 120 years for the building to finish construction, and several important Renaissance architects worked on it, including Michelangelo and Bernini. The Pope presides over numerous services here which attract crowds of up to 80,000. St. Peter’s Square is where you should park your rented luxury car before making your way to the Basilica.

The Catacombs of Rome

Visit the catacombs for a chilling experience. This is where Jewish, Pagan and early Christian Roman citizens were buried between the 2nd and 5th centuries. Located underground, it is easy to get lost here due to the numerous passageways that create labyrinths that are several kilometres long. You can choose between several catacombs to visit, from San Sebastiano and Calisto to Priscilla and Domitila.

Be sure to check the opening hours before visiting. It is advisable to rent a luxury car to visit the catacombs as the odd opening hours and high costs of taxis can be inconvenient. Additionally, remember to stick together with your group as you can get lost down there.

Rome has something to offer to everyone. Whether you are a history buff, religious or are interested in the ghost stories surrounding the catacombs, you will find multiple things to do. Renting a luxury car is the best way to explore the city as the roads are ideal for super cars. On your next vacation, find a luxury car rental Rome and drive the car of your dreams as you cruise the streets of one of the greatest cities in the world.